Why do we spend so much money subsidizing the highest earners (which includes me and most of you reading) in the US tax code? 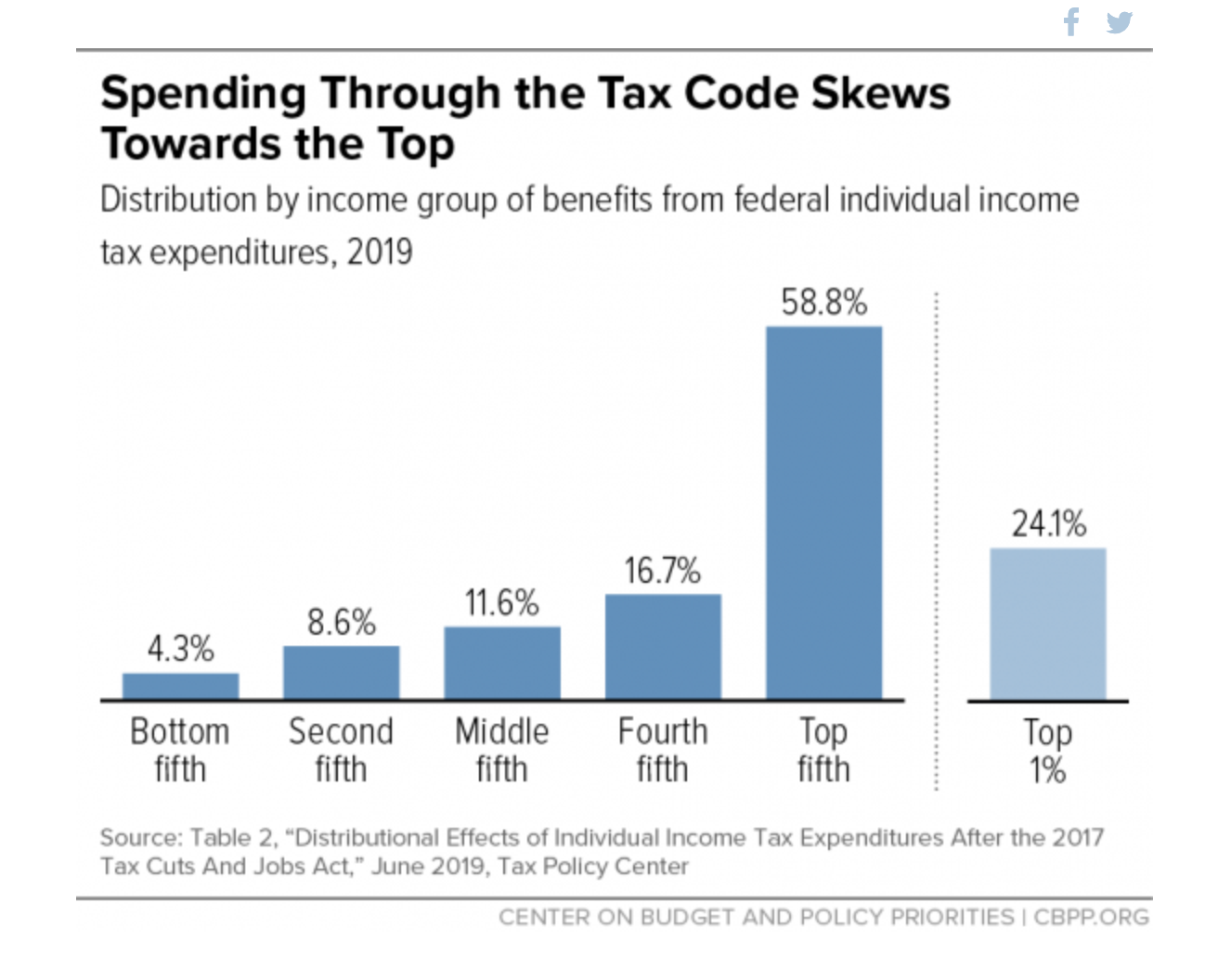 58% of ‘tax expenditures’ go to the top 20% of households by income. 24% go to the top 1% alone! Tax expenditures cost $1.4 T per year, which is more than medicare, social security, and defense spending (individually, not combined.) These expenditures are commonly referred to as tax breaks, but they function just like spending. You can think of them as tax money the government collect, but then immediately turns around and gives out to anyone meeting certain criteria, which is exactly how ‘entitlements’ like social security & medicare work. Interestingly, these benefits for the wealthy, if eliminated, would completely balance the budget by erasing our annual deficit (the difference between what the Federal government takes in from tax revenues minus the money it spends.) 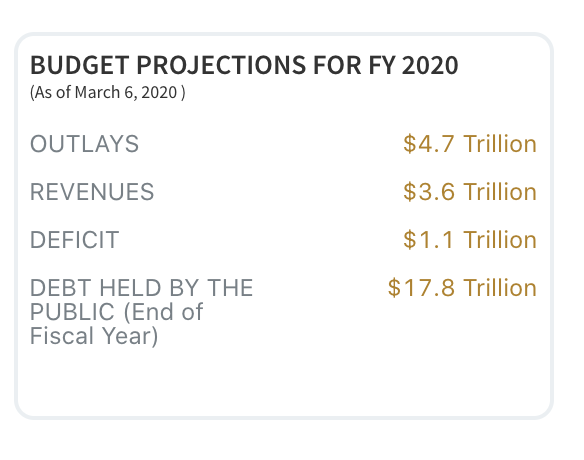 The mortgage interest deduction, 401k contributions, and all the tax-free benefits we get through employers like our health insurance, transit, and dependent care disproportionately benefit those in the top of the income distribution. Despite this, when people talk about ‘government spending’ they tend to take aim at the relatively small amount spent on poor people like housing subsidies, food stamps, and welfare.

(In case you’re curious, the Trump tax cuts didn’t alter the amount of tax expenditures by much. That said, they benefitted the rich much more than the less-rich, both in dollar and, more egregiously, on a percentage of income basis.)

Health insurance benefits are a huge one, which is insane, because we already spend about 17% of our annual GDP on health care, so why would we want to incentivize ourselves to spend even more on it, which is a huge windfall to all the insurers and hospitals making money from the system! Tax expenditures are meant to encourage certain types of consumption behavior (spend money on your retirement vs now, spend money on health care vs food/fitness, spend money on mortgage debt vs paying cash for your house). Sometimes these incentives might make sense. I personally would favor an ‘above the line’ (no need to itemize) deduction for charitable donations because I think it’s good encourage people to give their money away to others that can better use it.

There’s no reason for the government to let me write off nearly $20,000 of my income for maxing out my 401k account at work. I’m going to save that money anyway, as evidenced by the fact that when I max out my 401k, I continue to save any extra I can in a taxable account. Ditto for the mortgage interest deduction, which costs us $30 B per year and nearly all of which goes to people making more than $100,000 per year. There’s really only ONE tax expenditure which goes mostly to the poor, and that’s the Earned Income Tax Credit. Everything else is spent mostly on the wealthy, and the wealthier they are, the higher the dollar share of the credit they get for most expenditures.

Capping benefits at a low dollar figure, phasing them out based on income or wealth, or converting deductions to flat, refundable tax credits would help shift the benefits to those who really need them. The simplest thing to do would be to just eliminate most of these benefits, and perhaps replace the small amount of money that was going to the poor and lower-middle class with a few hundred dollar monthly universal income handout to everyone in the lower ~50% of the income distribution. (Charles Murray has suggested this, but with a much more comprehensive elimination of government entitlements, here.) 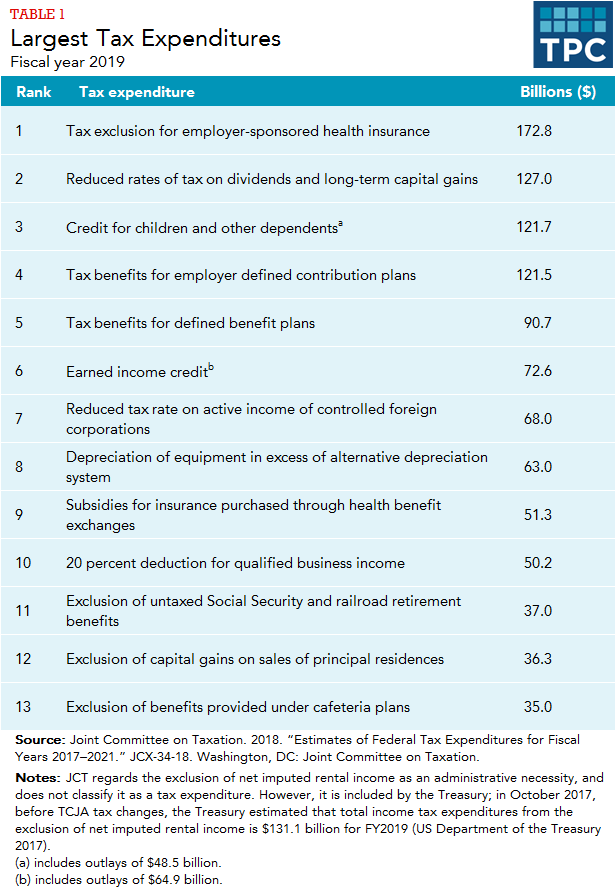 The answer, according to some well-reasoned arguments voiced by Fairmark.com‘s Kaye Thomas, is ‘not much.’  Here’s some interesting thoughts from Mr. Thomas’s article regarding taxable stock capital gains in the US.  (Bolding and italics mine):

“[I]t may be true that 100 million Americans own stock, but most stock held by middle class Americans is in IRA or 401k accounts, where the capital gains rate doesn’t apply. The tax rate matters for stock held outside these retirement accounts, and most of that stock is owned by extremely wealthy individuals. The bottom 60% of households own just 9%, while the top 10% of households own 70%. Over half of all capital gains go to households with income over $1 million. That’s roughly two-tenths of one percent of the population getting more than half the benefit of the cut in the tax rate.”

“Advocates of lower capital gains rates (and lower corporate tax rates, and other tax benefits for business) often cite the statistic that 100 million Americans own stock, implying that the middle class will receive an ample share of the benefit. Yet ownership of stock is highly concentrated in the hands of wealthy individuals, a small fraction of the population. The vast majority receive little direct benefit, or none at all. To borrow an analogy from John Kenneth Galbraith, the “100 million” argument is like justifying the cost of feeding more oats to the horses by pointing out that some will fall to the ground and be eaten by sparrows.”

I have a sister who currently lives in Norway.  Since she’s related to me by blood (and a US citizen), she can’t help but wonder “do I need to pay US income taxes?”  or “can I use foreign income to fund a Roth IRA?”

A good place to start answering them is IRS Publication 54.  Below are several guidelines for working and living abroad that I’ve gathered from Pub 54 as well as other IRS-related sources.  Unless otherwise stated, the dollar amounts used below assume you are filing a 2009 tax return and are single.  Also, the guidelines below are NOT for those living in US possessions like Puerto Rico or Guam.

DISCLAIMER:  Despite spending countless hours reading briefings on the IRS’s website, I am NOT an accountant and do not hold any accounting certificates (CPA, etc.)  This is strictly an informational post that could contain inaccurate interpretations of tax law (although I try my best to get things right.  If you’re familiar with these tax rules, please post any corrections, clarifications as comments.)  You can read further about anything I say before you use it yourself, or better yet, consult a qualified tax professional.

You generally do NOT have to file a US tax return if you are not self-employed and made less than $9,350 in 2009.  Take 2 minutes to answer a couple of questions here to determine if you need to file a return.  Of course, if you had any Federal withholding that you want to get back, file a return!  (Generally the same filing rules apply whether you are working in the US or abroad.)

If you get paid in foreign currency, you must translate that into US dollars for the purposes of calculating your foreign income on your US tax return.  The IRS says to “[u]se the exchange rate prevailing when you receive [income], pay, or accrue [an expense.]  If there is more than one exchange rate, use the one that most properly reflects your income.”  I.e.: use the exchange rate that’s valid at the time you get paid.  This might seem a little difficult, but you can easily make a spreadsheet with historical exchange rates on the days of your pay periods to figure it out.

(Hint: make 4 columns, the date you got your check, your payment in foreign currency, the historical exchange rate on that date, and a calculation multiplying your foreign income by the exchange rate to get it in US dollars.)

You can generally exclude foreign income of up to $91,400 (in 2009) from your US tax return if you are a resident of the foreign country.  You can meet the residency requirement in two ways:

a) be a ‘bona fide resident’, meaning you’ve been residing “uninterrupted” for at least 12 consecutive months, including an entire tax year.  Brief travel & vacations to other countries (like a month to the US for the holidays) are allowed, as long as your intent on these trips is clearly to return to the foreign country of residence.

Note that people in the US Armed forces are NOT included in this definition and do NOT qualify for the foreign income tax exclusion.

From the IRS: “In general, U.S. social security and Medicare taxes do not apply to wages for services you perform as an employee outside of the United States [with a few exceptions.]”  HOWEVER, if you work in one of the below countries, a ‘totalization’ tax agreement states that you will not have to pay dual social security coverage.  Generally, you’ll pay social security taxes to the (foreign) country in which you are a resident.  Here’s a link to the Social Security Administration’s international info site.

If you split your working time between the US and another country (while still meeting the residency requirements in the foreign country), you can prorate your taxes accordingly.  For example, say you earned a salary of $60,000 and worked 20 days in the US and 240 abroad.  You would have to include (20/240)*60,000 = $5000 on your US tax return since you earned that much in the US.  (The remaining $55K would be excluded under the foreign income tax exclusion.)

If the foreign income and/or housing tax exclusions might apply to you, fill out Form 2555.  (This form and its instructions should also help you in figuring out if you qualify, and how to calculate your exclusions.)

Remember that once you elect to take a foreign exclusion, it remains in effect until you revoke it.  Also, you can’t take any foreign income tax credits while excluding your foreign income (ie: no double benefits for the same income.)  You also would not qualify for the Earned Income tax credit, so consider that if you have a low income, especially if you have children.

* A special case for those with low incomes in foreign countries:  if your foreign income was less than the standard deduction + personal exemption ($9,350), you wouldn’t owe any taxes regardless of whether you took the foreign income exclusions.  Therefore, you could still contribute some of that income to an IRA (up to $5000 for 2009) and simply NOT elect to exclude your foreign income.