On October 2nd, 2008, I wrote an article called ‘What do do (and what NOT do to) in today’s turbulent financial markets’.  My main message urged investors to stay calm, and simply assess their financial situation as they would in any other type of market.  Then, I told folks to ‘do nothing’ in terms of changing their current investment plan.  I urged people not to pull their money out of the market, and to continue contributing regularly as they would under any other circumstances.  (I also suggested that now might be a good time to start investing as well.)

Now that the stock market recession appears to have passed (leaving 10% unemployment and several bankruptcies in its wake), let’s take a look at my advice and what the market has done since: 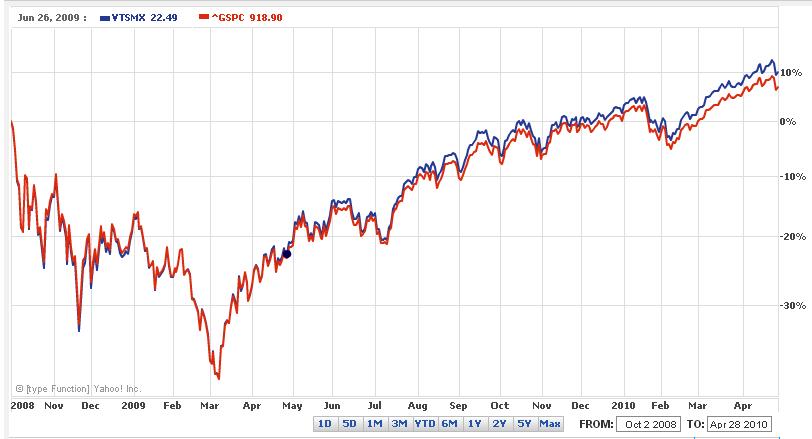 Roughly one and a half years has elapsed since I wrote the article (as of this writing.)  From that time period the total stock market (represented by Vanguard’s VTSMX, the blue line above) is up about 10%, with the S&P 500 (large cap stocks, the red line) up about 7-8%.  If we assume dividends were about 2-3% per year during this time period, the total market return was probably about 15% since then.

During the next 6 months after my article, things continued to get WAY worse, and then improved dramatically from a low in about March of 2009.  Of course, I had no idea which way markets would go in the short-term when I wrote my article (and don’t believe anyone who says they did), but history has demonstrated that after long periods of time, stocks tend to do fantastically well compared to other asset classes.

Academic studies show that investors are terrible at timing the market.  They tend to pull money out when prices dive, and put money in when prices skyrocket (think 1999.)  Obviously, this is contrary to the difficult-to-follow-but-oft-quoted Wall Street adage ‘buy low, sell high’.  Such studies have also shown that the investors who trade the most perform the worst, partly due to excessive trading fees as well as bad timing.

When you combine this information it is clear why a policy of regular stock market investment (‘dollar cost averaging’) into stock market index funds tends to outperform other more active investment strategies.  Perhaps an even greater benefit of this approach is a huge reduction in mental burden on the investor.  Investors who stuck to regular investment plans would have purchased a lot of shares on the cheap during the market decline, profiting immensely during the subsequent rise.

I wrote this look back at the recent recession not to say ‘I was right’.  (For the several months following my advice, stocks plunged!)  For all I knew, the recession could have lasted much longer than it did (or it could have been shorter.)  Stocks could still be below where they were when I wrote the article.

The important takeaway is that sticking to a well-thought-out investment plan makes sense even in times of severe market fluctuations.  A key part of this is making sure you’ve planned out your financial future enough to put things on semi-autopilot.  Start by following these four simple steps to wealth.

(If think you might benefit from professional advice or investment management, send me an email at Ward.Williams@greenlakepartners.com for a free consultation to see if I can assist you.)